7 Ways to Build Your Financial Wealth

Becoming rich is a process. Unfortunately, most people procrastinate the process until it is too late. They lie to themselves with well-rehearsed excuses about why they can’t begin building financial wealth today. Then, when the number of excuses outweigh the time available, they are confronted with a sobering reality of what could have been if only they were willing to follow the process for becoming rich. In Rich Dad Coaching’s “7 Ways to Build Your Financial Wealth,” we’ll lay out seven of the most influential lessons that rich dad taught Robert Kiyosaki to start him on his journey to becoming rich. So, if you are ready to stop making excuses and begin the process for building your financial wealth, then read on.

The truth is…You can’t save your way to wealth. Period. However, for many people, saving money is their plan for financial wealth—their only plan. They hope and pray that—after they pay their bills—there will be enough left over to put in the bank. But given the fact that most people usually have nothing left over after they pay the bills, saving for financial wealth is about as reliable as winning the lottery. Compounding the problem is that the interest rate paid by most savings accounts trails behind the rate of inflation. In other words, your money sitting in a bank—while earning interest—is becoming less valuable. Sure, you may have some money tucked away, but saving money only provides an illusion of wealth. Building real financial wealth begins with educated investing, not with saving money. So instead of saving, you need to…

Pay Yourself First
Becoming rich requires self-discipline and in none of the seven ways to build financial wealth is that more evident than when it comes to paying yourself first.
A lot of people claim to believe in paying themselves first, but few actually follow through and do it. Paying yourself first means that when money comes in, you designate a portion of it to purchasing income-producing assets before one cent goes to anyone or anything else. Most people can’t do this. They see the bills and financial obligations they have and use their income to satisfy those demands first. And by meeting everyone else’s demands, they end up with nothing short-term or long-term. In the short-term, they are unable to invest in what will provide escape from living paycheck to paycheck. In the long-term, they will have nothing to live on during retirement. You don’t commit to paying yourself first because you don’t want to pay your bills. You still satisfy your financial obligations. You do it because it is the kick in the butt needed to think like the rich. If you make $100 and are committed to investing $15 off the top but have $90 worth of bills, then finding the extra $5 to cover what you owe will light a fire under you. After a few months, you’ll find that not only your ability, but also your self-discipline, for becoming rich will increase. Taking on unnecessary consumer debt will become less appealing and your available financial resources for investing will increase. Friends, family, and especially your bookkeeper will say you are crazy. They’ll tell you that your electricity will be shut off or collection agencies will start harassing you. They’ll plead for you to continue to play it safe, while you make steps towards building financial wealth.

The assumption that living below your means leads to prosperity is one of the most common financial beliefs, yet one of the least effective. Just like saving money, most people think it is solid financial advice. And it is…if your goal is to be poor or middle class. The problem with living below your means is that it reinforces a poor and middle class mindset. When you see a luxury car, a dream vacation, or a designer suit, you looking longingly at the item, and then turn with head hung low and sigh, “I can’t afford it.” The simple phrase, “I can’t afford it” shuts off your financially creative mind. If you approach the same items with the mindset of the rich, you find that what appears out of reach is actually a lot closer than you realize. By asking yourself, “How can I afford it?” instead of telling yourself, “I can’t afford it.” you begin to think about money and its creation differently. The poor and middle class focus on borrowing money while the rich concentrate on creating money. When the poor and middle class focus on borrowing money for what they desire, they eventually arrive where their paychecks can no longer cover all their payments on another consumer loan or credit card. They are then forced to live below their means out of survival than their own choice. Because the rich concentrate on creating money, they are always expanding their means. They do this by purchasing assets that pay for what they want. Assets that produce cash flow cover the costs of the cars, homes, and vacations that are always beyond the grasp of the poor and middle class. Plus, once their luxury items have been paid for, the rich still own the income-producing asset. Compare this to the poor and middle class who at their end only have a collection of loan statements listing a staggering amount of interest paid. Regarding expanding your means, Robert Kiyosaki said, “[Living below your means] is easier in the short term, but harder in the long term…Remember, the easy road often becomes hard, and the hard road often becomes easy.”


Focus on Moving to the Right Side of the CASHFLOW Quadrant

The CASHFLOW Quadrant shows how people earn their income. It isn’t meant to put people in a box and create a financial caste system, but to help everyone expand their awareness and change their thinking. The CASHFLOW Quadrant is so powerful because once you understand the quadrants and how people think about money, you can make your financial decisions in the context of moving yourself to the right side of the quadrant. When it comes to becoming rich, those who are able to create and maintain wealth are found on the right side of the quadrant. They are the investors and business owners. They are those who think differently than those on the left side of the quadrant—the employees and self-employed. Regardless of which quadrant you are presently in, becoming rich begins— and ends—with a commitment to take the necessary steps to move and stay on the right side of the quadrant. Moving quadrants in terms of where you actually make your money can take time, but how you think about money can start today. Take time to listen to how those around you think about money. To which quadrant do you think they belong? What about your own thoughts? Do you think more like the E’s and S’s or the B’s and the I’s? Where you are in the CASHFLOW Quadrant today isn’t as important as where you focus, because today’s focus will create tomorrow’s reality.


If you want to become rich, you need to keep more of what you make and pay less in taxes. That isn’t to say you should do something underhanded, deceptive or illegal, but that you recognize that the tax laws are already set up to help you keep what is yours—provided that you are making your money from the right side of the CASHFLOW Quadrant. As you can see below, E’s and S’s pay the most in taxes while B’s and I’s pay the least. While some people want you to believe that means the rich aren’t doing their fair share, nothing could be further from the truth. Governments want economic growth. As a result, they create a tax code that rewards those who spur economic growth. They do this in the form of tax breaks. They know that entrepreneurs create jobs. They know that more jobs mean more E’s. And given the rate at which E’s are taxed, more 9-to-5 jobs means more money for the government. The government knows that what they don’t collect from the B’s and I’s because of tax breaks is more than made up for from E’s and S’s. So as long as the right side continues to play by the government’s rules and the left side continues to submit to them, you can expect to keep more of your income when you are on the right side of the quadrant.

Mind Your Own Business

While becoming rich requires work, don’t think that your hard work—and your work alone—is how you’ll make money.
The poor and middle class are taught, “go to school, get a job, and work hard” as a way to get ahead in the system. The rich however, are taught instead to work on the system. This is what rich dad meant when he taught Robert to, “mind your own business.” When you forget to mind your own business, you eventually end up owning a job instead of a business. In no place is this truer than in the S Quadrant. As you remember, S stands for Self-Employed. These are professionals like doctors, lawyers, etc. While it may seem these individuals are collecting a big payday, the problem is that if they don’t work, they aren’t paid. In that regard, it is no different from working at a fast food restaurant. They don’t own a practice or a business. It owns them. B’s and I’s on the other hand create systems that can run with or without them. They check their ego at the door and know that to make money, they don’t have to be the smartest or the best. They just need to build automated processes for their investing or entrepreneurial pursuits. They think in terms of scalability. By making processes scalable, exponential growth is only a matter of adding additional resources—namely other people’s time and money—instead of longer hours and harder work on your part. This is what it means to “mind your own business.”

Sit down with any financial planner and they will tell you to diversify. They will then go on to talk about small-cap and large-cap funds. They will explain why you will need funds that focus on this sector and a few from that sector. They will also encourage you to invest internationally too. There is only one problem with this diversification strategy. It is not diversification! If you follow this advice, all you will do is spread your money across one investment vehicle. While it is better than investing 100% of your money is one company’s stock, this type of diversification strategy is the strategy of the poor and the middle-class. True diversification comes from investing across different investment vehicles. No one investment is free from risk. All have strengths and weaknesses, but if you only diversify within one asset class, you are exposing yourself completely to the weaknesses of that asset class. The rich understand that true diversification comes from investing in real estate, commodities, businesses, and paper assets. They understand how each market affects the other. They know when to get in and when to get out. They can move their money from the asset classes that might be struggling at the moment to one that is poised for huge gains.

How To Make Online Appointment with DFA for Passport 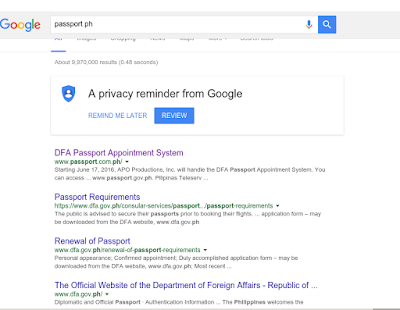